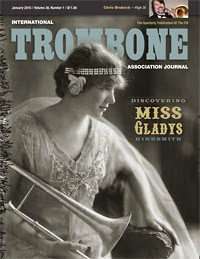 There is a certain sense of hopefulness that I bring with me every time I check my mailbox.  Maybe it’s because I’m far from home and living by myself that I hope for that connection.  I find myself wondering, “Will that care package my mom mentioned arrive today? What’s next on my Netflix list? Will my sister send me the pictures she promised?” Needless to say, I get pretty excited about mail (excluding the monthly electricity bill).  I was pleasantly surprised yesterday when the January issue of the ITA Journal, which was paired with a bank statement and credit card application, was waiting for me in the mail.  I must say that I was instantly intrigued by the cover.

One of the feature articles in January’s issue was “Discovering Miss Gladys” by Marta Jean Hofacre.  Former trombonist, Hofacre currently works at the Virginia Historical Society (VHS). She haphazardly discovered this glass plate image, who she later learned was a Miss Gladys Kirksmith (c. 1895-1979).  With further research, Hofacre discovered that Gladys had many musical sisters. 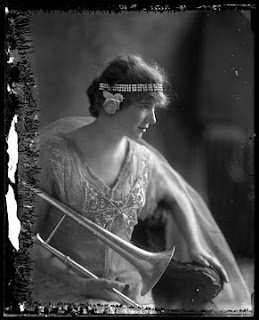 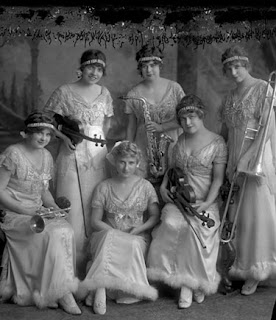 Known as the “Dainty Half Dozen”, these sisters played in a family orchestra. The parents of these women were origianlly from Ohio, but later moved the family to Iowa.  The musical family later became active in vaudeville and circuit chatauqua.
Circuit chatauqua stemmed from 19th century lyceum series (started in NY), which strove to provide educational and cultural outreach services for adults, usually in remote Midwestern towns where such opportunities were rare.  According to John Tapia, who has done research on circuit chatauquas, the Kirksmith sisters created “…masterful music rendered without the aid of a man.”
I won’t spoil the article for those of you who want to check it out for yourselves, but I really enjoyed discovering this Miss Gladys and her musical sisters.  The photographs of these ladies are quite stunning.  The particular photos I posted are courtesy of the VHS and were taken by Walter Washington Foster in 1915.  The fact that a woman had a professional career as a trombonist in 1915 is quite remarkable to me.  I would definitely like to delve further into this topic in the future!