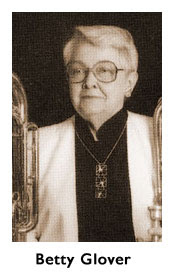 I’ve been doing a little research on the International Women’s Brass Conference.  This relatively young organization began in 1993, and the first conference was held in St. Louis, Missouri. The 2010 conference will be held in Toronto, Canada. According to the IWBC’s mission statement, it is their goal to provide opportunities that will educate, develop, support and inspire all women brass musicians who desire to pursue professional careers in music.

Meet the IWBC’s first pioneers.  The following photos and information are from the IWBC website http://myiwbc.org/

Betty Glover  retired in 1992 after 40 years as a faculty member of the College-Conservatory of Music at the University of Cincinnati. She had been Conductor of the Brass Choir from 1969-1992. Ms. Glover was Bass Trombone and Tenor Tuba player with the Cincinnati Symphony Orchestra and Opera (1952-1985). She was Conductor of the Brighton Brass Band, a group of professional musicians sponsored by Local #11, A.F. of M (1987-1992), and Instructor of Brass and Conductor of the Band and the Brass Choir at Otterbein College in Westerville, Ohio (1950-1952). Previously, Ms. Glover served for five years as Principal Trombone with both the Kansas City Philharmonic and the Columbus (Ohio) Philharmonic orchestras. 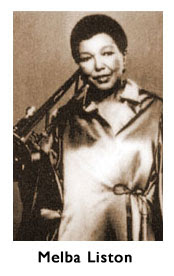 Melba Liston, a pioneering jazz trombonist, composer and arranger, died April 23, 1999. She was universally known as the first female brass player to make an impact in jazz, playing in the bands of Dizzy Gillespie and Quincy Jones. A stroke in 1985 partially paralyzed her, ending her performing career. But she continued to arrange and compose for musician Randy Weston, with the help of a computer.

Born in Kansas City, Mo., Liston met the trombone at age seven. By age eight, she was playing on a local radio station.  In 1937, Liston’s family moved to Los Angeles. At 16, she joined the musicians’ local and was writing and playing in the pit orchestra of the Lincoln Theater and later joining the band of trumpeter Gerald Wilson.

In 1949, she went on tour with Billie Holiday in the Southern United States. But it disillusioned Liston. She quit music, working for the Los Angeles Board of Education for three years, and was a movie extra plucking a harp in ‘The Prodigal’ and ‘The Ten Commandments.’

In 1955, Gillespie asked her to join his big band touring the Middle East and Asia for the State Department. A few years later, Quincy Jones formed a band to tour Europe with ‘Free and Easy’ and asked Liston to be his musical director and trombonist.

In the ’60s Liston freelanced as a player, but gigs were few. She began arranging music for MoTown performers, the Buffalo Symphony and was encouraged by Weston to compose.

In the ’70s she taught at the University of West Indies and the Jamaica Institute of Music, and in 1987, two years after her first stroke, she was awarded a Jazz Masters Fellowship from the National Endowment for the Arts.

In 1993, she shared billing and the cover photo with Weston on their CD, ‘Volcano Blues.’ 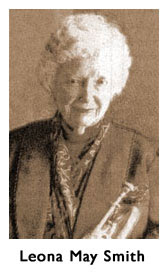 Leona May Smith made her first public trumpet performance at the age of nine on WNAC radio in Boston. At 11 she appeared as a soloist with Goldman’s Band, and at 14 played First Trumpet with the Boston Women’s Symphony. Ms. Smith went on to perform with numerous bands, including Fred Waring’s, and was the first woman trumpet soloist ever to play at Radio City Music Hall. Her frequent performances as a soloist throughout the northeastern US and Canada included appearances with the National Orchestral society and the Chautauqua Festival Symphony.

In the late 1940’s, Ms. Smith and her husband, composer and conductor George w. Seuffert, founded a summer ‘Music for Youth’ program in Newport, Vermont. Known for its teaching excellence, the music center drew talented young performers from all parts of the US and abroad. Reflecting her lifelong interest in providing musical opportunities for children, Ms. Smith has taught trumpet privately and in the Schenectady, New York, public schools. With her husband, she founded, funded, managed and promoted the Seuffert Band in New York City, which offered free concerts to the public, and she performed as its soloist and assistant conductor. Ms. Smith has played First Trumpet with the Brooklyn Symphony under Sir Thomas Beecham, and for 17 years was Extra Trumpet for the Metropolitan Opera. She was also featured in an NBC music education series narrated by Olin Downes.

2 thoughts on “A look back at the IWBC”